I am utterly mortified that someone in Philadelphia, home of the brotherly love, would intentionally and maliciously dismember HitchBOT the hitchhiking robot.  The robot successfully made it across Canada, the Netherlands and Germany. But it lasted only two weeks in the U.S., with stops at Fenway Park in Boston and Times Square in New York City before reaching Philadelphia.  The robot was found dismembered in Old City.  There is a prank surveillance video that has been circulating the internet.  This video was deemed a as a fake. 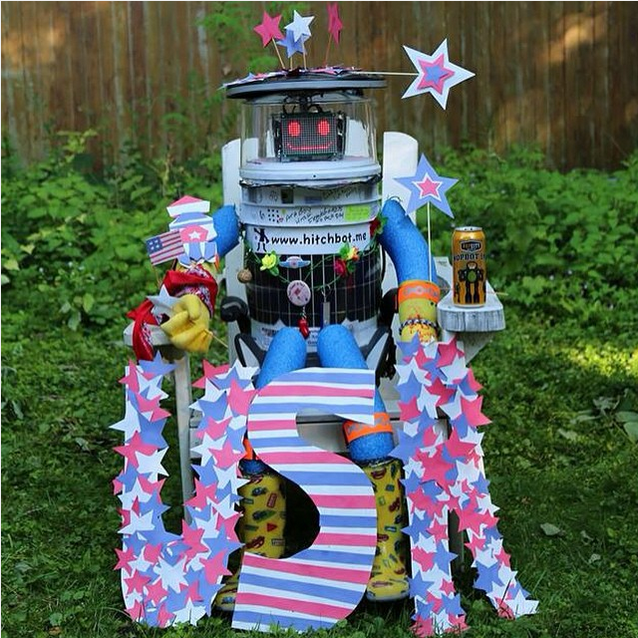 HitchBOT was conceived as a social experiment to gauge how people would treat a nonmobile robot hitchhiker.  Its creators wanted to see how humans would react to a robot who needed help hitchhiking.  They discovered 3 reactions from people: 1. Ignore him 2. Help him by taking him where he needed to go or 3. Destroying him.
When something tragic or negative happens humans tend to band together.  So although this is a very sad situation, there has been an overwhelming outpour of love and support. Philadelphia natives have volunteered their time, money, or skills to help rebuild HitchBOT.  Someone in Philadelphia created a kickstarter project to help pay for the rebuild.  The project earned 4x what was needed!

“What we see now is the outpouring of sentiment and people expressing their feelings — thousands,” she said. “We didn’t expect that, and this is something you don’t tend to find in typical human-robot interaction experiments.”

“We know that many of HitchBOT’s fans will be disappointed, but we want them to be assured that this great experiment is not over,” the group said.

Although the original HitchBOT is damaged beyond repair, HitchBOT’s creators are determined for a return to the United States in 2016!  His journey will start in Philadelphia.  This is our chance to really prove we are the City of Brotherly Love!